Stacey Jischke-Steffe is a Pioneer of the Mobile Retail Truck industry. An Entrepreneur and Consultant following a successful 10-year corporate career in marketing and advertising for Los Angeles radio stations and newsprint, Stacey co-launched Los Angeles’ (one of the nation's) very first store on wheels, Le Fashion Truck, in January 2011. Quickly recognizing the new business model's need for validity and community, and following a passion to work with fellow small business owners, Stacey went on to co-found West Coast Mobile Retail Association in the Fall of 2011, which expanded to the national American Mobile Retail Association in January 2013. Stacey has consulted and coached over 500 aspiring and existing mobile retail businesses, from locally owned to corporate brands, in all 50 states as well as Internationally. Her experience as a Pioneer in Mobile Retail led her into Lobbying interests, and she worked with California Assembly Member Rob Bonta in the summer of 2014 to pass statewide legislation for mobile retail and pop-up shops in the state of California. In house PR Representative and the creative driving force for both Le Fashion Truck and the Association, Stacey's expertise includes public speaking, public relations, marketing, branding, retail tours, and promotion coordination. Le Fashion Truck and the American MRA have received local, national and international press including the Today Show, CNN, USA Today, Wall Street Journal, NY Times, LA Magazine, KTLA 5, BBC + more. https://www.linkedin.com/in/staceyjsteffe


Jeanine Romo, a Los Angeles, native was always surrounded by fashion. As a young girl she would frequently visit the fashion district of Downtown Los Angeles. She obtained a Bachelors Degree in Fashion Design and Merchandising at California State University, Los Angeles in 2008. Upon graduation Jeanine began working in the industry for fashion designer to the stars, Emiliano Moreno.
Jeanine is a fourth generation entrepreneur from both sides of her family, it was always her goal to start her own business. In late 2010 she co-created Le Fashion Truck, Los Angeles' original fashion truck. Le Fashion Truck has made local, national & international press, including NBC's "The Today Show," Lucky Magazine, Los Angeles Magazine + more! As the mobile retail movement began to slowly grow in Los Angeles the need for an organization for mobile retailers grew. In September of 2011 Jeanine co-founded the West Coast Mobile Retail Association. In January 2013 the WCMRA expanded nationally and is known as the American Mobile Retail Association. Jeanine has consulted over 300 clients in 49 states. Her expertise lies in interior design and layout for retail and obtaining business licenses and permits. 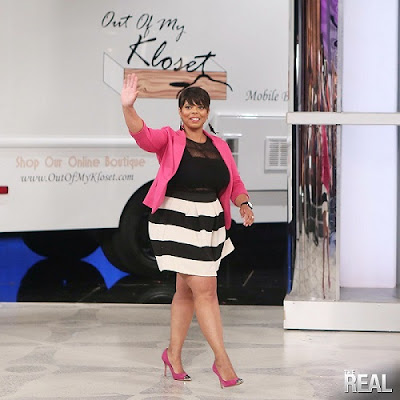 SHENEKA GORDON: OUT OF MY KLOSET

Sheneka Gordon launched her first online retail website, Out Of My Kloset, on February 4, 2012. A background in management lead positions in retail, Sheneka’s been employed by Wet Seal, Dooney & Bourke, Kenneth Cole, and the Broadway (now Macy's). Sheneka was the Guess Specialist and private label Specialist at the Broadway. Sheneka is very passionate about mobile retail and the fashion industry; she conducts ongoing fashion research, fashion forecasting, and stays abreast on emerging fashion trends by attending events such as the Magic Tradeshow, LA Market, and was recently featured with her mobile boutique Out of My Kloset on the "Real" talk show in October 2014 where she helped style an audience member. The company contributes to charitable events as well. Sheneka believes Out of My Kloset fits the standard and practices of good customer. Her philosophy is all customers should receive impeccable service, quality products, and a positive shopping experience, whether online or in the mobile boutique. “Without happy customers we are non-existent.” Sheneka’s expertise is Customer Service, Fashion Trends and Research, and Mobile Boutique Event Planning.


NAT DANIEL: BATI MAMSELLE MOBILE BOUTIQUE
Natecia "Nat" Daniel emigrated to the United States with her parents in the 1970's from Trinidad & Tobago. It was in high school that Nat became interested in fashion, art and anything creative. Upon completion of high school, Nat attended The Fashion Institute of Design & Merchandising (FIDM) in Los Angeles. While attending FIDM, Nat worked at several stores in the Beverly Center, thus solidifying her interest in the fashion world. After leaving FIDM, Nat returned home to Arizona and gave birth to twin daughters. A US Army Veteran, Nat served the country for 8 years as a Medical Laboratory Technician. Upon her honorable discharge from the army, Nat returned to Arizona where she continued to work in the Medical Laboratory field, with the desire to return to fashion always there. Nat read an article in Sunset Magazine about Le Fashion Truck, and that was it. Within 2 months she had purchased a truck, and 5 months later was on the road with her fashion truck Bati’Mamselle, the first mobile boutique in the state of Arizona. Nat recently left her job as a Medical Laboratory Technologist to operate her fashion truck full time. She intends to lobby the city of Sierra Vista, AZ to write new policies for mobile retailers and food trucks, as well as to increase the understanding from traditional business owners of the advantages of partnering with mobile retailers. Seeing a need for a women's business group in her Sierra Vista community, Nat founded "P.O.W.: Power Of Women" - a support group for women-owned small businesses. Bati’Mamselle has been featured in the local newspaper, and is a contributor to the Sierra Vista Women's Club annual fashion show. Nat has also collaborated with other business owners to coordinate Sierra Vista's 1st ever “Small Business Saturday” event.


If you would like further information about opening or growing your mobile business, please visit both the FAQ and services pages, and subscribe to our YouTube channel for free tips: http://www.youtube.com/AmericanMRA.

For questions on any of our services, email info@americanmra.com.

Promote Your Page Too